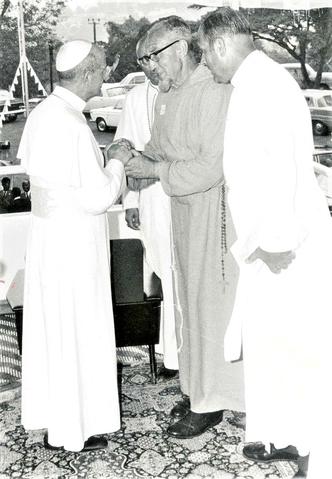 Photographic prints of Pope Paul VI (1897-1978) compiled for publication in 'The Capuchin Annual'. Most of the prints are annotated on the reverse. The photographs are mostly press agency prints from the United Press International Agency and Pontificia Fotografia Felici. The file includes the following images:
• The pilgrimage to the Holy Land by Pope Paul VI in January 1964. The photographs show the Pontiff greeting various dignitaries in Israel and Jordan including Patriarch Athenagoras I of Constantinople and King Hussein of Jordan.
• The visit to the United States by Pope Paul VI in October 1965. The photographs show him greeting U Thant, United Nations Secretary General, his address to the UN General Assembly, and celebrating a mass for peace at Yankee Stadium, New York. The file also includes some film negatives.
• The visit to Turkey by Pope Paul VI in July 1967. The prints show the Pontiff greeting Shenork I Kaloustian, the Armenian Patriarch of Constantinople, and various Orthodox Christian Prelates.
• The visit to Uganda by Pope Paul VI in August 1969. One of the prints shows Fr. Killian Flynn OFM Cap. (1905-1972), an Irish Capuchin missionary, greeting Pope Paul VI.