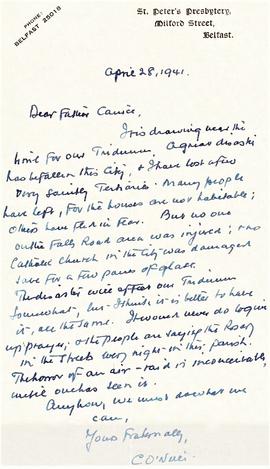 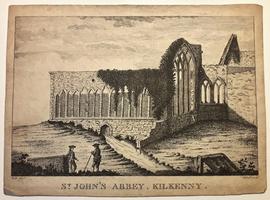 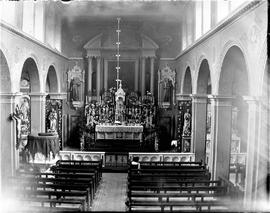 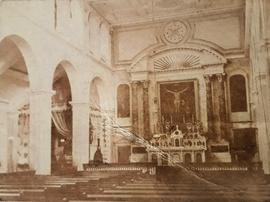 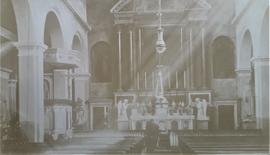 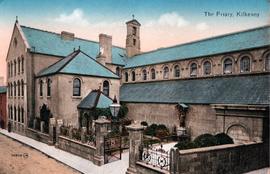 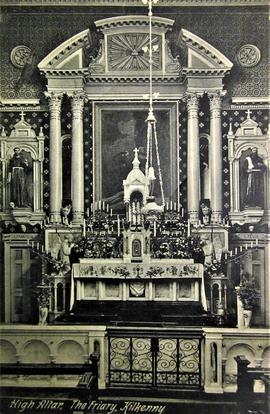 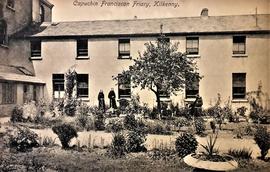 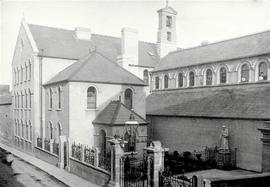 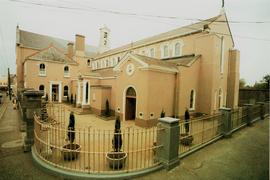 The Capuchin presence in Kilkenny can be traced to 1643 when two friars, Fathers Peter Nugent OSFC and Thomas Tuite OSFC, came to the town after their residence in Mullingar was destroyed by fire. Following their arrival in Kilkenny they stayed in a rented house near St. Canice’s Cathedral. The Bishop of Ossory, the Most Rev. David Rothe (1573-1650), was favourably disposed to the friars and he subsequently gave them charge of one of the chapels in the cathedral. On 8 March 1648 Bishop Rothe granted the Capuchins a canonical foundation with official rights and privileges to minister in the diocese. Though the Capuchins have had a long association with Walkin Street (later Friary Street) in Kilkenny, it is clear that this was not the location of their original foundation. There are references to at least three other locations where they had previously ministered. It is known that Fr. Sebastian Butler OSFC (d. July 1647) secured a residence and a chapel but its exact location has not been established. In about 1650, the Capuchin community consisted of Fr. Barnaby Barnewall OSFC (d. 1663), Fr. Anthony Nugent OSFC, Fr. Christopher Kearney OSFC (d. 1656), Fr. Gregory Mulchonry OSFC, Fr. Fiacre Tobin OSFC (d. 1656) and Br. John Verdon OSFC. Following the upheavals of the Cromwellian conquest, the Capuchins secured a plot of ground on St. Michael’s Lane, adjoining St. John’s Abbey (a former Augustinian Priory), where they established a hospice and an oratory in which ‘they preached the office of missionaries’.

In 1678 the Capuchins had a community of three in the city. Their friary and chapel continued to be situated near St. John’s Abbey. Fr. Nicholas Cornan OSFC was among the regular clergy of Kilkenny mentioned in the will of Bishop James Phelan in 1693. The Capuchin house adjoining St. John’s Abbey was suppressed in 1697 after the passage of the Act of Banishment which aimed to expel ‘all Regulars of the Popish Clergy out of this Kingdom’. Some of the dispersed friars from St. Michael’s Lane later moved to an alms house on Walkin Street. This alms house or ‘Poor House Chapel’ as it came to be known, was founded by Fr. James Tobin OSFC who was a native of Leyrath (or Lyrath) in County Kilkenny. At the rear of the alms house, a small chapel was built which the Capuchins served. The site of ‘Father Tobin’s Poor House’ is covered by the right wing of the present-day Friary, which runs at right angles to Friary (formerly Walkin) Street, near Pennyfeather Lane. Later, Fathers Thomas Murphy OSFC (c.1744-1817) and William Berry OSFC (c.1742-1822) obtained a small plot of ground beside the alms house on which they built a small church and community residence. When the Capuchins obtained this site the endowment of the alms house was transferred to the houses on the opposite side of Walkin Street. This residence was used by the Capuchins until 1848 when Fr. Peter Joseph Mulligan OSFC (1793-1853) built the present-day Friary Church of St. Francis. Fr. Mulligan, who was the guardian or local superior of the Capuchin community, also obtained a lease of a small plot of ground which enabled him to build an entrance to the church directly onto Walkin Street.

The new church was built over the existing alms house chapel ensuring that there was no interruption to day-to-day religious services. The alms house chapel occupied a portion of the area inside the main arches of the present-day Church of St. Francis. The architects for the new church were Messrs Wright and O’Toole. Additional adornment for the new building was secured in the form of a belfry with two bells (still in use), one of which Fr. Mulligan styled ‘Shiel’, and the other ‘O’Connell’, in honour of two of the great champions of Catholic Emancipation in the first half of the nineteenth century. A large cross (the first to be erected over a Catholic place of worship in Kilkenny since the Reformation) was also installed. Fr. Mulligan died in 1853, leaving Fr. Laurence O’Flynn OSFC (1807-1863) as the only Capuchin friar in Kilkenny until 1855 when Fr. Edward Tommins OSFC (1812-1889) arrived. Fr. Tommins secured pillars, pediments and altar cornices from the old cathedral of St. Mary’s and installed them in the Church of St. Francis when the new Cathedral was being built in the 1850s. On 23 September 1868 a new altar piece was erected, executed by Guardiocini, a celebrated Italian painter. In October 1873 a statue of the Sacred Heart by J. O’Reilly of Cork was installed in the sanctuary. An extension of the friary building was completed towards the end of the nineteenth century. On 15 December 1873 the foundation stone was laid for a new friary residence running parallel to Walkin Street. A novitiate for the Capuchin Order in Ireland was also opened in Kilkenny in 1875. A few years later, in 1884, a Seraphic School was established. In 1889 a lease was obtained for a small garden adjoining the friary and in July 1896 the site of the old alms house was obtained from the Most Rev. Abraham Brownrigg (1836-1928), Bishop of Ossory (see CA KK/2/1/1/1/15). This allowed for the building of an additional wing to the friary in 1897. This new wing was located at right angles to Walkin Street and extended to Pennyfeather Lane, completely covering the site of the earlier Poor House (constructed by Fr. James Tobin) and Fr. Mulligan’s later building. Side chapels were added to the church in 1938. The designs for these chapels were completed by John Joseph Robinson & Richard Cyril Keeffe, architects, and the builders were Messrs W.K. Cleere & Son of Kilkenny. The tercentenary of the arrival of the Capuchins in Kilkenny was marked in 1948 with elaborate religious and civic ceremonies. A Friary Hall (St. Francis Hall) was opened in April 1956 and a new novitiate building, designed by Sylvester Bourke (1928-2009), a local architect, was constructed in the early 1960s.

The fonds consists of records relating to the Capuchin community in Kilkenny City and in particular to the foundation known as the Church of St. Francis situated on Friary Street (formerly Walkin Street). The fonds includes legal records relating to the acquisition, transfer and disposal of church property (such as deeds of title, mortgages and bills of sale), financial records, and material relating to individual members of the Capuchin community in Kilkenny. The collection includes a large number of administrative and community files, financial statements and books of account relating to building construction and structural alterations, correspondence, plans, publicity material, photographs, library books and miscellaneous items of commemorative ephemera connected with Capuchin ministries and apostolates in Kilkenny. The collection also includes unpublished historical writings and biographical material relating to notable members of the Capuchin Order who ministered in Kilkenny. The fonds also includes records relating to the lay religious sodality known as the Third Order of St. Francis (now the Secular Franciscan Order) attached to the Capuchin Church in the city.

The material has been catalogued and a new arrangement has been imposed upon the fonds. The collection has been divided into eleven series, of which three have been further divided into sub-series. Due to the large extent of papers, one sub-series including deeds related to properties on Walkin Street (now Friary Street) has required a further division into sub-sub-series. The papers in each of the series represent either a particular area of activity, a subject, or a specific document or record type and have been arranged accordingly. Within the various divisions all the papers have been arranged chronologically.

The papers are generally in good condition