Some Extracts from Dom Bede's Letters which bring out his associations with M .M. M.
Letters written by Dom. Bede Lebbe

Newspaper cuttings, a Booklet from a Ceremonial for the temporary Profession of The Sisters of The Medical Missionaries of Mary, a handwritten and a tipped version of the Agreement between M.M.M. and the Priory of Glenstal

Mother Mary Martin Letters about materials of The Sisters.
Sent to and by the former Prior of Glenstal

Correspondence between Mother Mary Martin and the former Prior of Glenstal Dom. Bede Lebbe

Histories of the Order

Various histories of the Order both nationally and internationally.

History of Ireland and Wales Province

Short history of the Sisters of St. Joseph Chamber in Ireland and Wales. These two countries shared the same province. 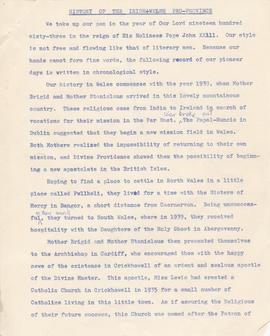