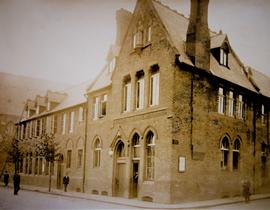 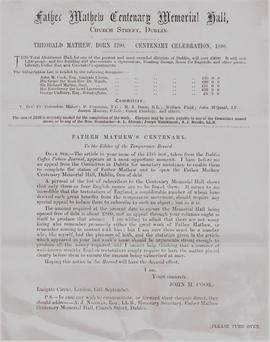 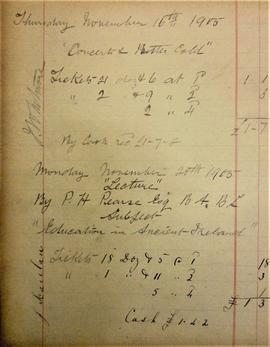 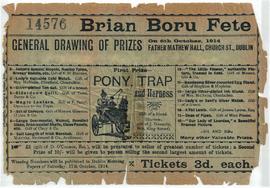 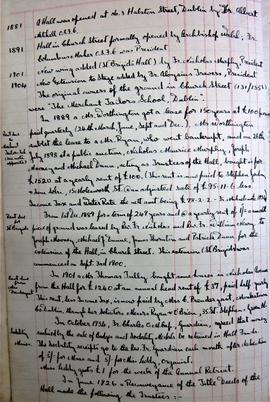 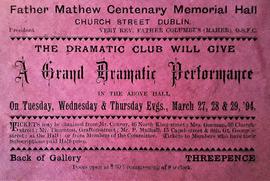 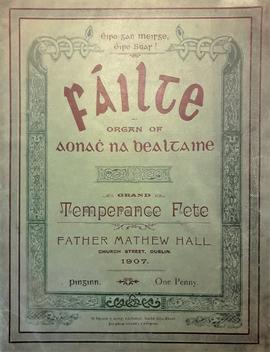 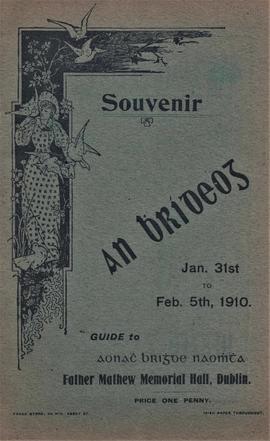 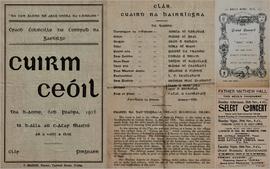 Father Mathew Hall stands at the corner of Church Street and Nicholas Avenue not far from Smithfield in Dublin’s north inner city. The origins of the Hall can be traced to the establishment by Fr. Albert Mitchell OSFC (1831-1893) in 1880 of a lay sodality called the ‘Temperance Society of the Sacred Thirst of Our Lord Jesus Christ’. In 1881, meeting rooms were secured for the sodality at 3 Halston Street. The lease for the building was signed on 31 January 1881. The building, although in a dilapidated state, was put into enough order for it to open within a fortnight. The first meeting of the temperance sodality took place in the Halston Street Hall on 14 February 1881. At this time, sodality and religious confraternity membership was increasing all over the country in line with participation in all forms of lay piety such as in rosary, retreat and novena groups. The rapid expansion of membership of the Halston Street Temperance Sodality was emblematic of this period of devotional fervour. Fr. Columbus Maher OSFC (1835-1894) assumed the role of President of the temperance sodality in June 1883. Fr. Columbus undertook the formidable task of resuscitating the entire temperance movement and transforming it once more into a populist working-class crusade. Largely because of his efforts, membership of the Hall rose to over a thousand in both the male and female branches of the sodality. It soon became clear that the Halston Street Hall was inadequate to accommodate the increasing numbers. With the centenary of Fr. Theobald Mathew’s birth approaching in 1890, Fr. Columbus and the sodality committee decided to conduct a search for more suitable premises to meet the growing membership demands and to perpetuate the memory of Father Mathew as the ‘Apostle of Temperance’. Eventually, the committee secured the above-mentioned site on Church Street. The foundation stone of the building was laid by the Most Revered William Walsh, Archbishop of Dublin, on 2 February 1890. It was designed by Walter Glynn Doolin (1850-1902). The Hall was formally opened on 25 January 1891. The total cost of the building was £4,000 to which was added another £2,000 in furnishings. The Hall quickly became a focal point for the local community as membership of the temperance sodality increased to almost two thousand members. Complementing the temperance function of the Hall were other social, cultural, and pastoral activities. Lectures, dramatic entertainments, pantomimes and sports events were organised by the sodality membership. Other activities included billiards, badminton, a drama group (the Father Mathew Players), a reading library and a cycling club.

Fr. Nicholas Murphy OSFC (1849-1923), appointed Sodality President in 1895, extended the Hall in 1901 with the addition of a new wing known as St. Brigid’s Hall. In 1905, further impetus was given to the entire temperance movement by the invitation offered by the Irish Bishops to the Capuchin Franciscans to undertake a ‘national crusade’ against the evils of intoxicating liquor. Fr. Aloysius Travers OSFC (1870-1957) extended the main auditorium of the Hall, inserted a new stage and erected an elaborate proscenium arch decorated with Celtic Revival motifs. A new library for sodality members was opened in the Hall in April 1908 by Fr. Peter Bowe OSFC (1856-1926), Provincial Minister. The Church Street Hall was regularly frequented by those interested in promoting the Gaelic cultural revival including Pádraig Pearse who urged ‘closer co-operation between the Gaelic League (Conradh na Gaeilge) and the Temperance movement in the cause that is common to both … the regeneration of Ireland’ ('Father Mathew Record', May 1908, p. 76). Ownership of the Hall was vested in several elected trustees who represented the members of the temperance sodality. A Capuchin friar was always appointed President. The day-to-day management of the Hall was entrusted to a committee which was selected at an annual general meeting. During the 1916 Rising, Father Mathew Hall was used a field hospital by the Irish Volunteers who had occupied the nearby Four Courts. Capuchin friars gave shelter to wounded citizens, military and rebels, who were tended to by members of Cumann na mBan.

An annual Feis Ceoil competition ('Feis an t-Athair Maitiú') was founded by Fr. Aloysius Travers OSFC in 1909. The initial syllabus included competitions divided between singing, instrumental performances, Irish dancing and artistic creation. Among the first adjudicators at the competition were Sinéad Ní Fhlannagáin (1878-1975), later the wife of Éamon de Valera, and the Sinn Féin politician, Brian O’Higgins (1882-1963). The Feis was an immediate success and attracted nearly two thousand entrants. Encouraged by this initial success more competitions were added to the Feis programme in subsequent years with the avowed aim of preserving native language and culture. In addition, various Dublin-based theatre companies used the Hall for their productions and several fund-raising concerts and drama festivals were held. In 1962, weekly bingo sessions were started, initially in the St. Brigid’s annex, and later in the main auditorium. To facilitate improvements to the Hall, the ownership of the building was formally transferred to the Capuchin Order in the late 1960s. Although these renovations succeeded in creating a relatively modern purpose-built theatre, by the early 1970s the membership of the temperance sodality had dwindled. As a result, the activities of the various temperance societies associated with the Hall came to an end. However, the Feis Maitiú continued to act as a focal point for the promotion of Irish culture and music.

In the absence of any state funding or assistance, the Capuchins maintained sole responsibility for staging the annual Feis competition. The only source for financing the Feis remained entrants’ fees and funding obtained from corporate sponsorship. By the mid-1990s, the costs associated with organising the Feis competition had become prohibitive. Further renovation work was also required if the Hall was to be maintained as a public amenity. In 1998 the decision was made to sell Father Mathew Hall and to discontinue the Order’s direct association with the Feis. In 2001 the Hall was sold by tender to Harry Crosbie, a property developer who converted the building into corporate office suites. As a listed building, the Hall’s interior Celtic Revival plaster-work was preserved, and other external architectural features were restored. The property remained vacant for some years before its purchase in 2014. The building is currently (2021) occupied by Newcourt Retirement Fund Managers Limited (NRFM).

Like its counterpart in Dublin, Father Mathew Hall in Cork originally functioned as a meeting place for the local Total Abstinence Sodality attached to Holy Trinity (Capuchin) Church. In 1896, it was noted that the sodality had over three hundred male members. On 30 January 1907, a Hall was opened on what was then Queen Street (later renamed Father Mathew Street). The Hall served as an amenity centre for the local community with a billiard room, a card room, a reading room, and a lecture theatre where occasional plays and talks were held. Major refurbishment work was undertaken in the 1940s during the presidency of Fr. Matthew Flynn OFM Cap. with the installation of new theatre seating, a balcony and improved stage facilities. The destruction by fire of the old Cork Opera House in 1955 left Father Mathew Hall as the only regular theatre venue in the city. Companies such as the Southern Theatre Group and Carol Clopet Productions subsequently signed fixed tenancies in the Hall. The reopening of Cork’s Opera House in 1965 prefigured a decline in the Hall’s fortunes but the commencement of bingo sessions offset some of the financial losses. The Everyman Playhouse Group took up a licence on the auditorium in the early 1970s and their renovation of the Hall ensured the continued survival of the building as a functioning theatre.

'Feis Maitiú Corcaigh' was established in 1927 by Fr. Micheál Ó Sé OFM Cap. (1892-1958) who saw the need for a platform to help and encourage people interested in the performing arts. Cork’s inaugural Feis ran for four days with about 300 competitors taking part. Father Mathew Hall was chosen as the venue for the Feis. The 400-seat auditorium has continued to serve as the festival’s venue ever since. Fr. Micheál served as President of the Feis for twelve years. During Fr. Matthew Flynn’s tenure as President, the first Cork Drama Festival was launched by the then Lord Mayor of Cork, Michael Sheehan. This festival, which has since ceased, was hosted at Father Mathew Hall, and ran for a fortnight under the adjudication of Ria Mooney (1903-1973), the Principal of the Gaiety Theatre School of Acting. By 1985 there were almost 12,000 performers registering with the Feis Maitiú Corcaigh. The festival was subsequently extended to eight weeks with classes in a range of disciplines covering a broad spectrum of the arts. The Feis continues to operate under the patronage of the Capuchin Order but the day-to-day management of the programme is now undertaken by a lay administrator.

The Temperance Hall at the Capuchin Friary in Rochestown, County Cork, was built in 1913 as a ‘centre of temperance propaganda’ for the surrounding locality. Fr. Sylvester Mulligan OSFC (1875-1950), backed by enthusiastic local support, organised a raffle which raised such a substantial sum that the Capuchins gave permission for the building of the Hall. When completed, the Hall was capable of seating just over 300 people. It was officially opened for public use on 15 December 1913 by the Lord Mayor of Cork and Fr. Thomas Dowling OSFC (1874-1951), Provincial Minister. The new Hall consisted of a concert-platform, an auditorium and spacious committee rooms which could be used as classrooms. Despite the decline of the temperance movement, the Hall continued to function as a venue for drama, music and dancing productions. Fr. Declan McFadden OFM Cap. (1901-1979) later strove to re-organise the management of the building which changed its name to Marian Hall in the early 1950s. Having laid vacant for many years, the former temperance hall at Rochestown was demolished in the 1990s.

The fonds consists of records relating to the Temperance Halls established by the Capuchin Franciscans in Dublin and in Cork. Most of the material dates from circa 1910-1960. The records relate to the establishment of sodalities and confraternities, the opening and operation of temperance halls, and the organisation of missions and retreats connected with the promotion of the Total Abstinence movement. The fonds consists of minute books, administrative files, financial statements, correspondence, plans, publicity material, newspapers, photographs and miscellaneous items of ephemera and artefacts connected with the use of these halls for the promotion of temperance and as locations of recreation for members of various local total abstinence societies. The fonds also includes records relating to the annual Father Mathew Feis ('Feis an t-Athair Maitiú') and to the educational lectures, concerts, sketches, dramatic plays, pantomimes and other social and cultural events held in these Halls to further the cause of temperance. It should be noted that the closure of Father Mathew Hall on Church Street in Dublin in the late 1990s likely resulted in the loss of a significant portion of the archival records of this institution.

The material has been catalogued (2018) and a new arrangement has been imposed upon the fonds. The collection has been divided into three series, of which two have been further divided into sub-series. The series represent the three main Halls founded by the Capuchins to further the temperance mission. Due to the large extent of papers relating to the Dublin Father Mathew Feis, this particular sub-series has been further divided into three sub-sub-series. The papers in each of the sub-series represent either a particular area of activity, a subject, or a specific document or record type and have been arranged accordingly. Within the various divisions all the papers have been arranged chronologically.

The papers are generally in good condition