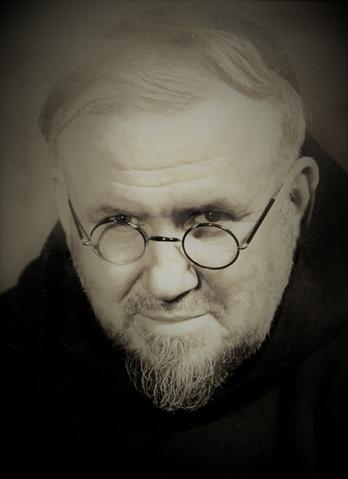 John Moynihan, the son of Thomas and Mary Moynihan, was born on 24 November 1900 in Castlegregory, County Kerry. He was educated at Aughacasla National School (eight years) and at St. Brendan’s Seminary, Killarney (four years) and he matriculated in June 1918. He studied at All Hallows College in Dublin from October 1918 to March 1919. He joined the Irish Capuchin Franciscans in September 1920 taking the religious name of Senan. He took his final vows in 1925 and he was ordained a priest in 1928. Shortly after his ordination in 1928 he was appointed editor of ‘The Father Mathew Record’, a popular monthly publication of the Irish Capuchins which promoted the Order’s overseas’ missions (particularly in Africa) and carried articles supporting the cause of total abstinence. Fr. Senan strove to create a higher grade, more literary publication. He was acquainted with many well-known Irish writers and artists and he secured permission from the Order’s leadership to publish an ‘Annual’ in 1930. ‘The Capuchin Annual’ was published from 1930 to 1977. The publication was very much the work of Fr. Senan and he remained its editor until 1954. In 1955 a decision was made at the Capuchin Provincial Chapter to remove Fr. Senan from the editorship of the ‘Annual’. Soon afterwards he travelled to Perth at the invitation of Archbishop Redmond Prendiville (1900-1968), a fellow Kerry man. Fr. Francis Moynihan, a brother of Fr. Senan, had also been resident in Australia and was parish priest of St. John’s, Clifton Hill, in Melbourne. Fr. Francis was also the editor of ‘The Advocate’, a leading Catholic newspaper in Australia. Fr. Senan arrived in Perth in 1959. He was incardinated into the Perth Archdiocese on 1 April 1959 (as a diocesan priest having left the Capuchin Order). On arrival he took up a position as chaplain to religious sisters at St Anne’s Hospital, Mt Lawley (now Mercy Hospital). He did not, however, act as a chaplain to the patients. Archbishop Redmond Prendiville appointed him the first archivist of the Archdiocese of Perth in July 1962. Fr. Senan died in Perth on 26 July 1970. He is buried in Karrakatta Cemetery, Perth.