Some Irish Capuchins displayed a noticeable sympathy with the republican interest during the Civil War. The Church Street community maintained close ties with various republicans including Frank Gallagher who carried out propaganda work on various Anti-Treaty bulletins, newsletters and publications. Gallagher worked alongside Erskine Childers (who was also on good terms with some Capuchin friars) on the republican publicity staff. Both men sided with Éamon de Valera in the Treaty debates. Gallagher and Robert Brennan were significant contributors to the 'Daily Bulletin' which was produced at this time (See CA IR/1/8/3/8). As a consequence, most of the tracts and publicity material obtained by the Capuchins reflected a rigidity to the Sinn Féin version of the conflict and demonstrated an implacable hostility to the Treaty and its supporters. 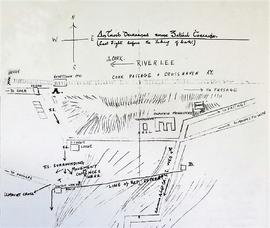 Photocopy of a letter from Fr. Michael O'Shea OFM Cap., Capuchin Franciscan College, Rochestown, County Cork, to Winifred Etheridge, c/o Major F. Etheridge DSO, Broadway Cottage, Littleham, North Exmouth, Devon. The letter (27 January 1923) provides a detailed, eyewitness description of an engagement between Free State soldiers and irregular republicans near Rochestown College in August 1922. Winifred Etheridge was a sister of Ian McKenzie Kennedy, a Scottish-born republican, who died during the battle. The file also includes a photocopy of a letter (26 August 1922) from Nora Lucey, 3 Pembroke Street, Cork, to Mrs McKenzie Kennedy providing further detail on the skirmish and on the death of her son, Ian McKenzie Kennedy. A copy sketch map (drawn by Fr. Michael O'Shea OFM Cap.) showing details of the battle between Free State forces and Anti-Treaty irregulars around Rochestown is also extant in the file. 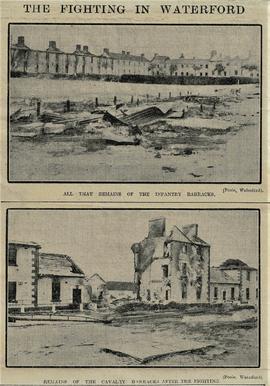 A large collection of contemporary republican newspapers and Anti-Treaty publications. The sub-series includes extensive files of both 'Poblacht na hEireann (War News)' and the republican newssheet, 'The Daily Bulletin'. 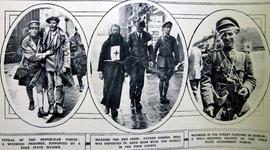 The file contains the following editions of this illustrated weekly newspaper:
8 July 1922 (No. 4,342. Vol. 161); 15 July 1922 (4,343. Vol. 161). The editions contain numerous photographic prints of the fighting in Dublin at the outbreak of the Civil War. Includes a photograph of ‘Father Dominic [O'Connor OFM Cap.], who was reported to have been with the Rebels in the Four Courts’.