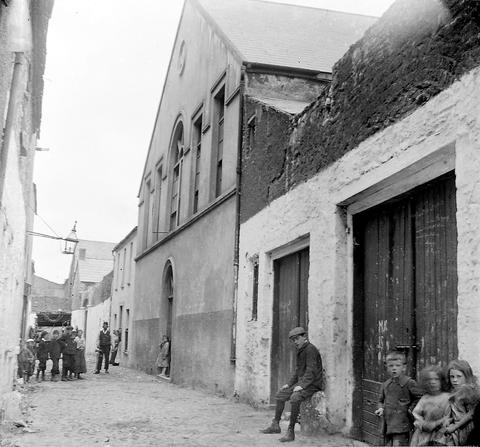 A view of the site of the former Capuchin church in Cork known as the ‘South Friary’, situated on Blackamoor Lane. With a cover annotation which reads ‘Fr. Theobald Mathew’s old church, Cork’. By the early eighteenth century the Capuchins had established a permanent residence in the South Parish of Cork city and by 1741 had built a small Friary on Blackamoor Lane situated between O’Sullivan’s Quay and Cove Street. The small chapel in the photograph was built by Fr. Arthur O’Leary OSFC (1729-1802) in 1771. It subsequently became known as the ‘South Friary’. During the first half of the nineteenth century Cork city underwent a rapid expansion in both geographical size and population. It soon became apparent that the Friary Church on Blackamoor Lane was not sufficient to meet the demands of a growing congregation. In the 1820s Fr. Theobald Mathew OSFC (1790-1856) moved to build a larger church in a more convenient location on Charlotte Quay. The Friary Church on Blackamoor Lane was eventually closed on 6 October 1850. The building soon fell into disrepair.