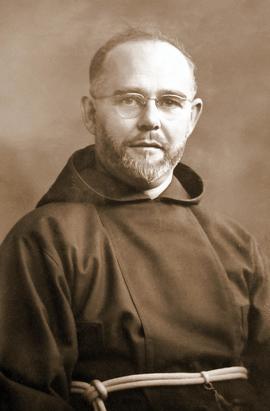 Joseph Anglin, the son of John and Julia Anglin, was born in Aherla, County Cork, on 29 April 1910. Andrew Anglin (b. 11 Feb. 1900), an elder brother of Joseph, joined the Capuchin Franciscans in 1918 and took the religious name of Terence. He later became a missionary friar, first in the United States (from 1929) and later in Africa (from 1943). He died on 12 September 1947 in Livingstone, Northern Rhodesia (later Zambia) where the Irish Capuchins had established a missionary custody. The Anglin family were devoutly Catholic, and Joseph followed in his older brother’s footsteps by joining the Capuchins in Cork in October 1927, taking the religious name of Henry upon his reception into the Order. He took his final vows and was solemnly professed as a friar in October 1931. By this time, he had obtained a Bachelor of Arts degree from University College Cork. Following four additional years of clerical studies, he was ordained a priest in St. Eunan’s Cathedral in Letterkenny, County Donegal, on 23 June 1935. In the years following his ordination, Fr. Henry served as an assistant to Fr. Senan Moynihan OFM Cap., the founding-editor of ‘The Capuchin Annual’ periodical. Following the Capuchin Provincial Chapter of 1955, Fr. Henry was appointed editor of the ‘Annual’ with Fr. Felix Guihen OFM Cap. (1898-1981) taking on the role as manager of the Publications Office. The appointment of Fr. Henry as editor of the ‘Annual’ elicited no real change in the ethos of the publication which continued to include an eclectic mix of articles on a wide range of topical, political, historical, artistic, literary, and spiritual subjects. Although the work of collating and editing articles for the yearly publication was strenuous and occasioned frequent bouts of stress-related ill-health, Fr. Henry succeeded in maintaining the scholarly content of the publication. Crippling financial losses brought about the demise of ‘The Capuchin Annual’ in 1977. Fr. Henry died on 30 May 1977 just a few months after completing his work on the final edition of the ‘Annual’. He was buried in the Capuchin plot in Glasnevin Cemetery in Dublin. 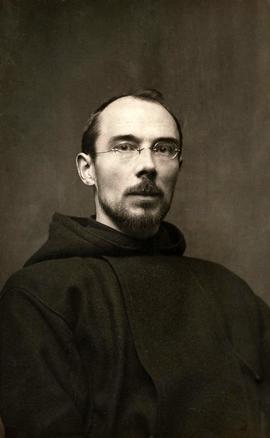 Thomas Bibby was born on 24 Oct. 1877 in Bagenalstown, County Carlow. He was baptised on 28 Oct. 1877. His family were proprietors of a woollen mill at Greensbridge and operated two drapery establishments in Kilkenny City, one in Parliament Street and another on High Street. He entered the Capuchin novitiate at Rochestown on 7 July 1894 and took the religious name of Albert. He was solemnly professed on 8 May 1900 and was ordained a priest at St. Mary of the Angels, Church Street, Dublin, on 23 Feb. 1902. A gifted scholar, Fr. Albert was among the first batch of Capuchin students to receive a BA degree from the Royal University. He later became a professor of philosophy and theology and taught these subjects to Capuchin students for some years after his ordination. One of his first students was Fr. Dominic O’Connor OFM Cap. Fr. Albert was active in the Gaelic revival movement and became a fluent speaker of Irish. He was also engaged in temperance advocacy and gave missions sometimes solely in Irish in Gaeltacht areas. He was also involved in the Columcille branch of Conradh na Gaelige in its early years. Briefly a part of the community of friars in Kilkenny, he moved to Church Street, Dublin, in the early 1900s. In the aftermath of the Easter Rising, Fr. Albert ministered to a number of rebel prisoners in Kilmainham Jail and in other locations. He was present at the execution of Seán Heuston on 8 May 1916 and wrote an account of his final hours. He was later a regular correspondent with prominent republicans and their relations. On 16 Dec. 1920 both Fr. Albert and Fr. Dominic O’Connor OFM Cap. were arrested by British forces during a raid on the friary on Church Street. Fr. Albert was detained for some hours in Dublin Castle but was afterwards released whilst Fr. Dominic was sentence to five years’ penal servitude. When the Four Courts was attacked on 27 June 1922 in the opening engagement of the Civil War, Fr. Albert was present in the building alongside Fr. Dominic. Both priests remained with the Anti-Treaty irregulars until the Four Courts was evacuated. They then proceeded to administer to Cathal Brugha and other IRA men occupying the Hamman Hotel on O’Connell Street. In June 1924, Fr. Albert was sent to the United States and was eventually appointed Pastor of the Capuchin Mission at Santa Inez in California. He immediately set about restoring both the parish and the structures of the old Franciscan Mission. Modern plumbing and electricity systems were installed at Santa Inez and Fr. Albert was joined by Friars Reginald O’Hanlon and Colmcille Cregan. However, Albert’s health deteriorated and he was soon admitted to St. Francis Hospital in Santa Barbara. He died on 14 Feb. 1925, a mere three months after his arrival in Santa Inez. He was buried just outside the mission’s chapel. His remains (along with those of his former pupil Fr. Dominic O’Connor OFM Cap.) were later repatriated to Ireland and he was buried in the cemetery of Rochestown Capuchin Friary, Cork, on 14 June 1958.