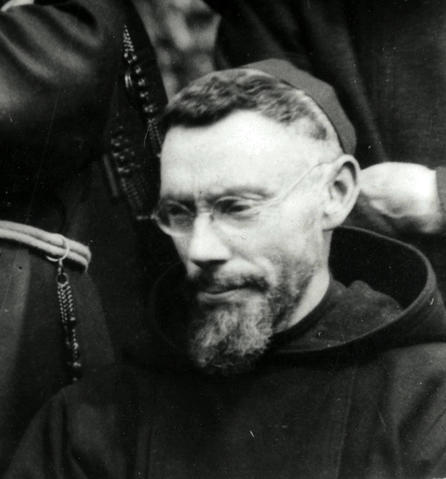 William Patrick Travers was born into a prominent Cork family on 20 March 1870. The family were devoutly Catholic. John, his elder brother, was also a Capuchin friar and took Anthony as his religious name. Another brother was an Augustinian friar while a sister became an Ursuline nun. William joined the Capuchin Franciscans in 1887, took the religious name of Aloysius, and was ordained to the priesthood in 1894. From his earliest years, Aloysius took a keen interest in promoting the work of the temperance movement. He was appointed President of the Father Mathew Hall in Dublin, and held this position from 1904-13. During his years as President, he used the Hall for the promotion of temperance and as a recreational venue for the members of the Sacred Heart Sodality. To further support the ideals of temperance and to revitalise interest in Irish culture, he founded 'The Father Mathew Record' which began publication in January 1908. The year before, he had inaugurated the Féis Maitiu which promoted Gaelic cultural revivalist activities such as storytelling and festivals of native song and dance. Fr. Aloysius also used the pages of the 'Record' to strongly promote a ‘Buy Irish Campaign’. About this time, he also established the League of Young Irish Crusaders. Like many of the Capuchin friars of the Dublin community, Fr. Aloysius was involved in ministering to the Rising leaders during their imprisonment and was present at the execution of James Connolly in Kilmainham Jail on 12 May 1916. He later championed the cause of various labour leaders in Dublin. It has also been speculated that Fr. Aloysius undertook a secret mission to Pope Benedict XV in connection with the Irish struggle. He was elected seven times to the office of Provincial Definitor (Councillor) and was Provincial Minister of the Irish Capuchins from 1913-6. In his later years, he became an enthusiastic member of the Legion of Mary and published numerous devotional tracts including a popular prayer book, 'The Voice of the Church', 'The Seraphic Standard' and 'ĺosa Mo Mhian'. He died on 2 May 1957 at the Capuchin Friary, Church Street, Dublin. He was 89 years old and was a Capuchin friar for almost 69 of these years. He was buried in Glasnevin Cemetery.