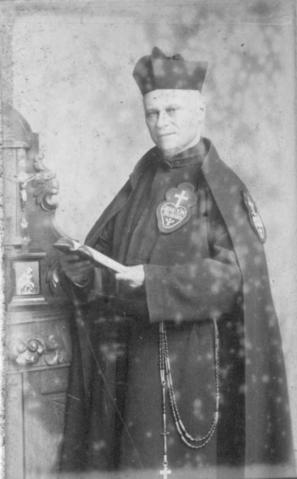 Father Salvian of the VII Dolours, in seculo- Vincenzo Nardocci, was born in Carbognanq, diocese of Viterbo, Italy, on the I9th October I822.

Hia mother died when he was quite a child, and his father married again. The second wife was no exception to the general rule of stepmothers. The little Vincenzo was very harshly treated until he received a benifice when ten years of age and was partially emancipated from her control. He was enabled to study for the secular priesthood, but his thoughts were bent on a religious life.

When little more than 18 years of age, on April I6th 1841, he took the habit of our Congregation, and was professed on the I7th April of the following year.
In 1849 several young members of our Congregation were ordained in Sts. John and, Paul's, Rome. Of these four volunteered for the English Province. Frs, Salvian, Evarist, Raymund and Bernardine. Fr. Salvian was ordained too weak and delicate for a trying mission like England; but the then General, Fr. Anthony of St. James, prophesied that he would outlive his companions. Such indeed was the case.

He arrived in England on September 2Ist 1849. He was shortly afterwards made Vice-Master of Novices. In 1850 he was appointed Master of Devices and he fulfilled this office for more than 12 years. In I86j he was made Rector of Broadway and-in 1866 he became Rector of St. Anne's, Sutton.

In 1869 he came to the Retreat of St. Paul of the Cross, Dublin, and remained there with the exception of one year (from 1878 to 1879 when he discharged the duties of Rector of Sutton for a second time) until his death on the I7th of September 1896. Father Salvian was of slight build and seemingly of poor health; yet he was strong enough to keep the observance until his declining years, and was seldom subject to any infirmity.

As Master of Novices he was unrivalled. He was so gentle and withal, so firm that no one could resist his influence.

As Rector, he found money-matters and other annoyances belonging to the office too much for him, and always felt unhappy in such a position.

During his latter years his life was calm and full of good works. He was not a great orator or much of a missioner. His voice and strength did not suffice for these labours.
He was a most efficient confessor. Nearly all the religious went to confession to him. "The priests of Dublin looked upon him as their spiritual father, and the aity confided all their sorrows to his sympathetic keeping. He was universally loved and revered whilst a member of this community.

Within the last two years his memory began to fail, and in some degree his intellect. Such an affliction naturally deprived him of that geniality of character for which he had been all his life so remarkable.

His last illness was not a very long one. He seemed rather to waste away than to be hurried by any disease to the grave.

Numbers bewailed his loss; and one of his penitents, a secular priest, asked for the privilege of singing his Requiem Mass at his funeral.

Thus passed away calmly and without pain on the I7th of September (1896) the last of the pioneers who founded this Province.

is the superior of