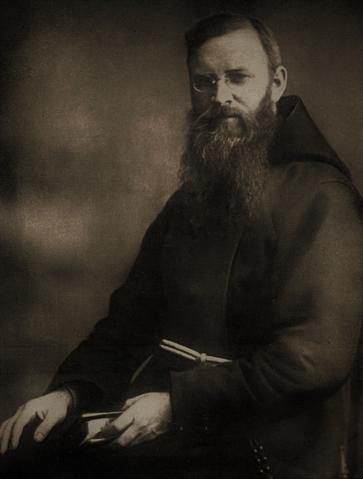 John Francis O’Connor was born on 13 Feb. 1883 in County Cork. He was born into a devoutly Catholic family. His father, John O’Connor, a teacher, and his mother, Mary Ann Sheehan, were both tertiaries of the Third Order of St. Francis attached to Holy Trinity Capuchin Church, Cork. A brother of Many Ann Sheehan had already joined the Capuchin Franciscan Order. Fr. Luke Sheehan OFM Cap. was one of the first Catholic missionaries to minister in the American state of Oregon. A good number of John’s siblings also entered religious life. John entered Rochestown College, Cork, in the Autumn of 1897. Having successfully completed his secondary education, he entered the Capuchin novitiate on 1 Oct. 1899 and received the religious name of Dominic. A year later he took his simple vows and in the Autumn of the same year began studying for a philosophy degree in the Royal University, Cork. He was ordained a priest on 17 Mar. 1906 in the Capuchin Friary in Kilkenny. He later enrolled in the Catholic University in Louvain where he obtained a Sacrae Theologiae Baccalaureus (Bachelor of Sacred Theology). In response to a call from Cardinal Michael Logue, Archbishop of Armagh, Fr. Dominic volunteered for chaplaincy work with the British armed forces during the First World War. After spending two months with a Scottish brigade in England, he transferred to a hospital unit bound for Salonika, Greece. After approximately two years of service, Fr. Dominic resigned his post in 1917, returned to Ireland and was appointed to the Capuchin community in Holy Trinity Friary, Cork. Fr. Dominic soon attained notoriety in nationalist circles and was appointed chaplain to the Cork Brigade of IRA Volunteers by Tomas MacCurtain. As chaplain, Fr. Dominic was the first to appear at the MacCurtain home in Blackpool, Cork, on the morning the Sinn Féin Lord Mayor was killed by British forces (20 Mar. 1920). He also served as chaplain to MacCurtain’s successor as Lord Mayor of Cork, Terence MacSwiney, who was arrested on 12 Aug. 1920. Fr. Dominic ministered to MacSwiney throughout his hunger strike in Brixton Prison and was present for his death on 25 Oct. 1920. Soon after his return to Ireland, Fr. Dominic was arrested at the Capuchin Friary on Church Street, Dublin. He was taken to Dublin Castle and in January 1921 was court martialled and sentenced to five years’ imprisonment. During his confinement, he became acquainted with two notable republican detainees, Ernie O’Malley and Pádraig Ó Caoimh. Fr. Dominic served about a year of his imprisonment in Parkhurst Prison. Following the Anglo-Irish Treaty in December 1921, there was a general amnesty for prisoners and Fr. Dominic was released in January 1922. On 25 February 1922, he was granted the freedom of Cork ‘as a mark of respect for his valuable services rendered to the first two Republican Lord Mayors of Cork’. With the onset of the Civil War the Capuchins in Church Street were once more involved in ministering to besieged republicans. In June 1922 the Four Courts, located only a couple of hundred meters from the Church Street Friary, was attacked by Free State forces. Fr. Dominic (assisted by Fr. Albert Bibby OFM Cap.) provided spiritual comfort, assisted in the evacuation of the wounded, and later facilitated the surrender of the defeated garrison. Soon afterwards, Fr. Dominic returned to Holy Trinity Friary, Cork. On 26 Nov. 1922 a decision was made by the Provincial Definitory of the Irish Capuchins to have Fr. Dominic transferred to the Province’s Mission in Bend, Oregon, United States. This was the location of Fr. Luke Sheehan’s (Fr. Dominic’s uncle) pioneering missionary work some years before. For the remainder of his life Fr. Dominic performed routine duties associated with the missionary apostolate of a Capuchin friar. He was appointed temporary rector of St. Francis de Sales Cathedral and published the first of a two-volume history of the Diocese of Baker in 1930. In August 1935 he sustained serious injuries in a car accident from which he never fully recovered. He died on 17 Oct. 1935 and was buried in Bend, Oregon. His remains (along with those of Fr. Albert Bibby OFM Cap.) were later repatriated to Ireland and he was buried in the cemetery of Rochestown Capuchin Friary, Cork, on 14 June 1958