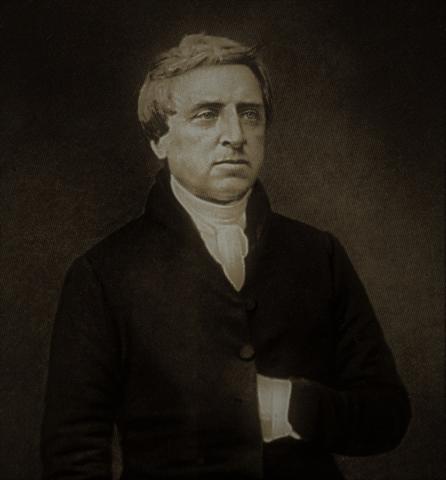 Theobald Mathew was born at Thomastown Castle near the village of Golden in County Tipperary on 10 October 1790. The Mathews were an old, landed family with both Catholic and Protestant branches. Francis Mathew (1738-1806) was the owner of Thomastown Castle. He was created Viscount Landaff in 1793, and then Earl Landaff in 1797 (the title derived from the place in Wales from which the family had come to Ireland in the seventeenth century). The title was sometimes referred to as the Earldom of Llandaff since that is the more common Welsh spelling, but it is Earl Landaff in the Peerage of Ireland. The Mathews of Thomastown held this title from 1797 to 1833. In the 1760s, Francis Mathew had adopted his orphaned cousin, James Mathew, Theobald’s father. On reaching adulthood, James was appointed the agent for the Mathew estate. Unlike many of the Mathews, James remained a Catholic throughout his life. His wife, Anne Whyte, was also a Catholic. They had twelve children, the fourth of whom was Theobald. The young Theobald Mathew had a privileged childhood, enjoying favoured treatment from his Protestant relation, Lady Elizabeth Mathew, the daughter of Francis Mathew. Lady Elizabeth knew and approved of Theobald’s priestly ambitions, and in 1800 she provided the money to pay for his education at St. Canice’s, a Catholic boarding school in Kilkenny. In September 1807, Theobald enrolled at St. Patrick’s College, Maynooth, for seminary training. However, his plans were upset when in his first year he was forced to leave Maynooth to avoid being expelled for holding what appears to have been a drunken party for his fellow students. He was subsequently accepted by the Capuchin Franciscan Order as a novice and he made his way to Church Street in Dublin to be trained. The Capuchins, in common with many of the religious orders in Ireland, were weak at this time and were thus extremely anxious for new recruits.

On 3 April 1813 Mathew was ordained a deacon. A year later he was ordained a priest by the Most Rev. Daniel Murray (1768-1852), later Archbishop of Dublin. After a brief sojourn in Kilkenny, Fr. Mathew moved back to Cork where he came under the influence of Fr. Daniel Donovan OSFC (d. 14 Jan. 1821) who was elected Provincial Minister of the Irish Capuchins in 1816. Fr. Mathew devoted a good deal of his time to practical charitable enterprises, establishing schools for poor and orphaned children. In these schools the children were taught household skills in addition to elementary subjects. In 1821, Fr. Donovan died, and Fr. Mathew was elected his successor as Provincial Minister. He would continue to hold this position until 1851. In 1832, he broke ground for an elaborate, Gothic-style Capuchin church in Cork (subsequently called The Church of the Most Holy Trinity), on Charlotte Quay (later renamed Father Mathew Quay). Due to a lack of funds the church would remain unfinished in Fr. Mathew’s lifetime. It was not until 1890 that the spire and façade were added. Nevertheless, Fr. Mathew gained an excellent reputation in the local community for his tireless endeavours in support of the poor of Cork. He was also noted for his exceptional spirit of ecumenism. He was on friendly terms with several leading Protestants and Quakers in the city. Fr. Mathew joined the total abstinence movement in Cork in April 1838. The Cork Total Abstinence Society was established with the avowed aim of encouraging people to make one enduring act of which would keep them sober for life. This act of will was enshrined in the pledge to abstain from the taking of intoxicating liquor.

From the very beginning Fr. Mathew’s endeavours in the cause of temperance gained striking success. Under his leadership, teetotalism drew many adherents in Cork and spread throughout Munster and eventually throughout Ireland. The Society’s ranks quickly grew, and within three months, Fr. Mathew had enrolled 25,000 new members in Cork alone. In five months, the number had increased to 130,000. He travelled across Ireland, convincing thousands more to pledge teetotalism. In August 1842, he began traveling internationally, first to Scotland, then England. At its height, just before the outbreak of the famine in 1845, Fr. Mathew’s temperance movement had enrolled three million people, or more than half of the adult population of Ireland. By the mid-1840s he was frequently travelling to Britain with equally dramatic results. The leading nationalist politician, Daniel O’Connell (1775-1847), described the temperance movement as Fr. Mathew’s ‘mighty moral crusade’. In 1847, the priests of the diocese of Cork selected him to be their bishop. However, there was strong opposition from members of the hierarchy. It was held against him that he had accepted a pension from the Government. One long-standing critic among the bishops described him as ‘the hired tool of a heretical government’. This reflected the long-standing determination of the Catholic Church in Ireland not to accept state funding and the interference that would come in its train. Fr. Mathew’s financial mismanagement (he was known to be bountiful and generous to the point of extravagance), liberal Catholicism and Protestant associations also told against him. The Pope acceded to the almost unanimous advice of the Irish hierarchy that Fr. Mathew should not be appointed to the bishopric. Nevertheless, his standing as a popular figure remained undiminished. In July 1849, he visited the United States where he was greeted with enthusiastic acclaim. In Washington, the Congress unanimously admitted to him to a seat on the floor of the House; he was the first non-American after the Marquis de Lafayette to be so honoured. Rallies and demonstrations were held across the country to honour Ireland’s renowned ‘Apostle of Temperance’.

Despite this personal adulation, it was clear that Fr. Mathew’s movement had reached its zenith. From the late 1840s the movement began to decline almost dramatically as it had risen. His health started to fail (he had suffered a stroke in 1848) and crippling debts began to accumulate, making it increasingly difficult to continue the temperance crusade. The onset of the famine, brought about by the failure of the potato crop in 1845, dealt a grievous blow to the movement; thousands of Fr. Mathew’s followers died or emigrated in those years. Many of those who remained in Ireland had to contend with more pressing concerns than the maintenance of their pledge to abstain from alcohol. In late 1853, despite declining health, Fr. Mathew ventured to Limerick where he administered the pledge in what was his last appearance at a public meeting. In October 1854, on medical advice, he travelled to Madeira, but his health continued to deteriorate. In the absence of its charismatic leader the temperance movement continued to weaken. He suffered a severe stroke in late 1856 and died in Queenstown, County Cork, on 8 December 1856. He was 66 years old. He was buried in St. Joseph’s Cemetery in Cork, which he had established twenty-six years earlier.