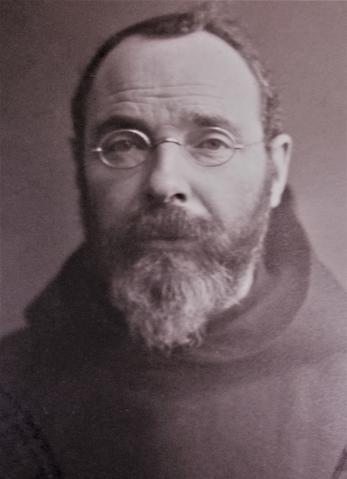 John Kavanagh was born in Mountmellick in Queen’s County (later County Laois) on 12 June 1876. Having spent some years in the Seraphic College in Rochestown, County Cork, he was received into the Capuchin Order in March 1893. He was ordained a priest in Dublin on 23 February 1902. Soon after his ordination he was stationed in Kilkenny as a Professor of Philosophy, but most of his life as a priest was spent in Dublin and in Cork. An accomplished scholar, Kavanagh spent many years in libraries and archives in England, France, Italy, Spain and Belgium, transcribing thousands of documents in a very clear hand, recording everything relating to the Irish Capuchins which could be discovered overseas. His work in transcribing the seventeenth-century Latin text, the ‘Commentarius Rinuccinianus’, published by the Irish Manuscripts Commission in six volumes between 1932 and 1949, is well known. His extremely important corpus of manuscripts, surrogate copies and transcribed materials for early Capuchin history are now extant in the Irish Capuchin Archives. He served as Provincial Archivist for the Capuchin Order in Ireland from 1919 to 1958. In 1918 he was appointed to investigate the cause of two seventeenth century Irish Capuchin martyrs, Fr. Fiacre Tobin OSFC (d. 1656) and Fr. John Baptist Dowdall OSFC (d. 1710). Kavanagh also had a life-long interest in Fr. Theobald Mathew OSFC (1790-1856) and amassed a huge quantity of research and documentary material relating to his life and nineteenth-century temperance campaign. In recognition of his contribution to Irish historical scholarship, the National University of Ireland awarded him an honorary Doctorate of Literature (D. Litt.) in 1947. Outside of academia, Kavanagh was a well-known preacher, missionary, and retreat-giver. In 1924 he was asked to travel to the United States where he spent several months assisting Irish Capuchin friars in missionary and preaching work. He was also a long-time incumbent of the position of Secretary of the Irish Capuchin Province (1922-31; 1937-55) and was elected Provincial Deifintor (Councillor) in 1931. His later years were blighted by dementia and he died on 16 May 1965 in the Bon Secours Hospital in Dublin. He was buried in Glasnevin Cemetery.