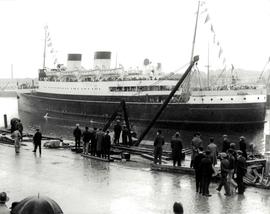 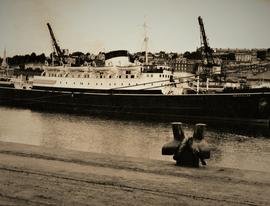 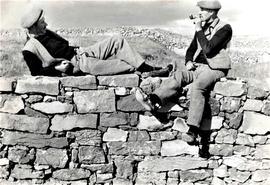 This section includes deeds, leases and other documents relating to title to 133-134 Church Street and a yard at the rear of the said properties extending out onto 27 Bow Street. These plots are now partly occupied by the present-day Father Mathew Hall. Many of the documents relate to Fr. Nicholas Murphy’s efforts to secure these properties which enabled the extension of the Church Street Hall. A long-term lease of the properties was obtained in 1886 and the outright purchase of the plot was secured in 1963.

This section includes deeds, leases and other legal documents relating to the title to three houses fronting onto Church Street (nos. 138-140) which subsequently became part of the present-day Capuchin Friary. It was evident that Fr. Nicholas Murphy OSFC (1849-1923) and the other Capuchins friars were eager to purchase these derelict properties with the intention of ‘pulling down the houses’ in order to expand the Friary. In 1886, Fr. Nicholas succeeded in acquiring these plots which later became part of the Friary garden. By 1914, a solicitor reported that all traces of the original buildings and houses had completely disappeared.

This section includes deeds, leases and other related legal documents relating to title for 141 Church Street and properties at the rear thereof known as 1-3 Thunder’s Court. By the late 1880s, St. Mary of the Angels and the adjoining Capuchin Friary had been built, but the lack of any extra ground, apart from the sites on which these buildings stood, remained a great inconvenience. As part of an extension plan, a lease of the aforementioned properties was secured in 1888. This section also includes a lease of a property known as no. 151 Church Street dated 7 Sept. 1920.

This section includes deeds and leases relating to the acquisition of 142 Church Street, formerly known as ‘the Swan Inn’, which later became part of the present-day Capuchin Friary. In 1809, Fr. Patrick Corcoran OSFC secured a plot of ground between Bow Street and the old Capuchin chapel (built in 1796) on which he erected a building, the lower part of which formed what was known as the ‘Church Street Schools’, with the upper storey being used as a residence for some of the religious. By the 1870s, Fr. Daniel Patrick O’Reilly OSFC and other Capuchin friars from North King Street were keen to secure outright title to 142 Church Street in order to build a new friary adjacent to St. Mary of the Angels. Fr. O’Reilly wrote to his solicitor in March 1874 expressing his intent on ‘having it at any cost’. However, by this point, the title to the properties had become increasingly complicated as rents for the plots and title to the premises thereon were seemingly vested in joint owners. Nevertheless, the Capuchins succeeded in purchasing 142 Church Street at a public auction held on 30 March 1874.

This property formed part of the historic Munster Arms’ site (see section 2.1.1.1). It was situated on the north side of Walkin Street approximately two hundred yards from the junction of that street with High Street and immediately opposite the entrance to the Capuchin Friary. The property was bounded to the north by the Regent Cinema (demolished in 1998), to the west by Garden Row, to the south by Friary Street, and to the east by the Friary Street Car Park which was owned by Kilkenny Corporation. By the late twentieth century, the property at 17 Friary Street comprised a three storey nineteenth-century residence, formerly end-of-terrace but afterwards detached. The property had been left vacant for many years. The file relates to the sale of the property by the Capuchin Order to property developers in the late 1990s.