Cures associated with Visits to the Grave of Father Mathew

File relating to cures associated with visits to the grave of Fr. Theobald Mathew OSFC in St. Joseph’s Cemetery in Cork. The file was compiled by Fr. Stanislaus Kavanagh OFM Cap. The file includes:
• Statements from Hannah Keohane regarding her son who was cured through the intercession of prayers at the grave of Fr. Theobald. (18 Mar. 1943).
• Letters to Fr. Stanislaus from Fr. Mel Farrell OFM Cap. and Fr. T.J. Walsh re Annie Nolan, 21 Abbey Street, Cork, who reputedly recovered her sight through the intercession of Fr. Theobald.
• Statements and correspondence re Madge Twomey whose throat condition was cured through visits to the grave.
• Letters relating to Mrs Kathleen Skillington (née Walsh) whose leg was cured following a visit to Fr. Theobald’s grave. The file includes the testimony of Dr D. F. Hegarty, surgeon. 5 Jan 1938.
• Letter from Fr. Paul Neary OFM Cap. to Fr. Stanislaus Kavanagh OFM Cap. referring to the cause of Fr. Mathew. He wrote ‘It is to be regretted that there is no one of ourselves free and willing to take an interest in the cause – as according to rumours a great many things occur at the grave. The people come from a distance. No one has any knowledge of themselves, the favours they have received or where they come from’. 28 Jan. 1932. Manuscript, 2 pp.
• ‘Father Mathew / Leader and Priest / Cures wrought at his tomb’. The text of a speech given by Fr. Aloysius Travers OSFC on the occasion of the 123rd anniversary of the birth of Fr. Mathew. Oct. 1913. Typescript, 8 pp.
• Prayer for the beatification of Fr. Theobald Mathew OSFC. It is noted that this prayer was submitted to the Most Rev. Daniel Coholan, Bishop of Cork, for ecclesiastical approval in May 1928. Typescript, 1 p. 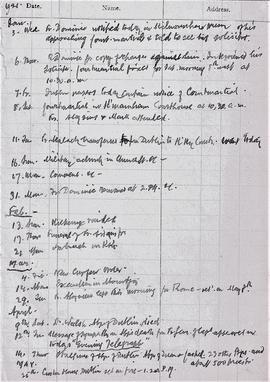 ‘Charles Letts’s Small Octavo Diary and Note Book’. A daily record diary of Fr. Stanislaus Kavanagh OFM Cap., Church Street, Dublin. Routine entries record the ministries and day-to-day activities of various Capuchin friars. The diary also chronicles the detention and trial of Fr. Dominic O’Connor OFM Cap. An entry on 5 Jan. 1921 reads: ‘Fr. Dominic OSFC notified today in Kilmainham Prison of his approaching Court Martial and told to see his solicitor’. Other entries in the diary refer to the activities of British military forces in the wake of an upsurge in Republican attacks. On 16 Jan. Fr. Stanislaus wrote ‘The front portion of our Church and whole street closed with barbed wire. … This was done in early hours of morning. Many unable to go to Mass to day. House to house search by military. Show’s the respect of the English government for the Lord’s day’. Fr. Dominic’s transfer ‘under heavy escort’ to Kingstown for the boat to take him to Wormwood Scrubs Prison was recorded on 31 Jan. 1921. On 13 February, Fr. Stanislaus noted that the Capuchin Friary in Kilkenny was ‘raided by the Black and Tans in their usual rough fashion’. A loose page in the file summarizes some key events in 1921. Reference is made to the court martial in Kilmainham Jail of Fr. Dominic O’Connor OFM Cap. Other events mentioned in the 1921 summary include military raids in Kilkenny (13 February), the imposition of a curfew order (4 March), the executions of the Irish Volunteers (Thomas Bryan, Frank Flood, Bernard Ryan, Patrick Doyle, Patrick Moran and Thomas Whelan) in Mountjoy Jail on 14 March, the death of Archbishop William Walsh (9 April), and the burning of the Custom House in Dublin following an attack by the Irish Republican Army (25 May).

Extracts from the 'Dublin Review' periodical relating to Fr. Theobald Mathew OSFC and the temperance movement in Ireland. The extracts date from 1840 and include reviews of the 'First Annual Report of the Irish Temperance Union (25 Feb. 1840) and the 'Speech of John Hackney Esq. on Temperance delivered on Dec. 29th, 1837, at the Rotunda' (Dublin 1840). The notebook also contains extracts from the 'Limerick Chronicle', 17-20 Aug. 1842 referring to a speech by Fr. Mathew at Ennistymon in County Clare. The extracts were compiled by Fr. Stanislaus Kavanagh OFM Cap. 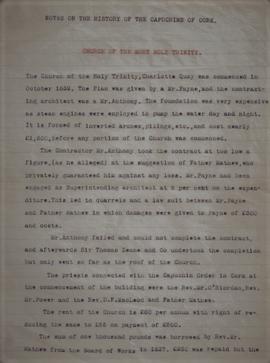 Notes on the history of Holy Trinity Church, Cork, by Fr. Stanislaus Kavanagh OFM Cap. from the laying of the foundation stone in October 1832 to circa 1856. Reference is made to the construction, financing and decoration of the Church. Some of the notes were copied from ‘an account book of the Cork community preserved in the Archives in Dublin’ (See CA HT/3/1/1). Also, a typescript copy of an article on the Church from 'Battersby’s Catholic Registry' (1851), p. 221.

Letters re the Cause of Father Mathew

Copy letters of Fr. Stanislaus Kavanagh OFM Cap. to John J. Sharkey, Catholic Total Abstinence Union, Boston, referring to the cause of Fr. Mathew. Fr. Stanislaus wrote ‘No efforts either privately or publicly have been made by any member of our Order to direct further interest in the intercession of Fr. Mathew, and yet the devotion to him is as abiding in the hearts of the people – especially in Cork – as it was the in the years that followed his death’.

Letters to Fr. Angelus Healy OFM Cap. from Fr. Stanislaus Kavanagh OFM Cap., St. Bonaventure’s, Cork, seeking information on the Capuchins of Cork city (with sources) from circa 1654-1766. Fr. Stanislaus refers to Fr. T.J. Walsh’s article on the Cork Capuchins: ‘It reaches a high level, and will read well. You know he is preparing it for the Capuchin Annual, with illustrations’.

Manuscript
Memoranda re books held in the Kilkenny Friary Library. The notes were probably compiled by Fr. Angelus Healy OFM Cap. and Fr. Stanislaus Kavanagh OFM Cap. Particular reference is made to annotations, marginalia and inscriptions found on the frontispieces of the volumes. Some of the memoranda are very fragmentary and incomplete. Many of the books referred to in the memoranda are now extant in the Provincial Archives. See CA KK/10 for a listing of some these texts from the Kilkenny Friary Library.

Memorandum compiled by Fr. Stanislaus Kavanagh re the bequest of Baron Hale

Memorandum by Fr. Stanislaus Kavanagh OFM Cap., Provincial Secretary, referring to the discovery in the Church Street Archives in 1922 of a collection of papers labelled ‘Correspondence between Dr. Cullen and the Fathers relative to the New Church in North King Street’. Fr. Stanislaus refers to a loose folio sheet titled ‘Notabilia’ relating to the Baron Hale bequest which was the ‘only authentic expression of an obligation for Masses to be found … in the Archives’. (See CA CS/2/3/2). The memorandum affirms that the ‘Notabilia’ document was submitted by Fr. Stanislaus to a definitory meeting in November 1922 which ordered him to investigate the whereabouts of the investment and interest money referred to in the bequest. The memorandum reports Fr. Stanislaus’s findings in relation to the Hale bequest. It notes that in 1893 the legacy, which had been converted to stocks worth £181 11s 5d, was transferred to the Commissioners for the Reduction of National Debt and was subsequently paid to Jane E. Pratt, lawful sister and next of kin of Fr. Daniel Patrick O’Reilly OSFC, one of the priests in whose name the legacy was invested. Fr. Stanislaus concludes by affirming that ‘interest on the investment was drawn up in 1883 which warrants the assumption that the masses were likewise said up to that time’. With copies of the memorandum and transcription of the ‘Notabilia’ document made by Fr. Stanislaus on 10 Nov. 1921. One of the copies is endorsed by Fr. Stanislaus: ‘submitted to the General Definition, Rome, Decree of Condonation from the Sacred Congregation, dated, Feb. 22, 1927 [and signed by Fr. Edwin Fitzgibbon OFM Cap.], appended’. The file also includes a typescript note suggesting that ‘Baron Hale’ may refer to Sir Matthew Hales, Lord Chief Justice of the King’s Bench. Some of the notes by Fr. Stanislaus also refer to the correspondence of Fr. Lawrence Gallerani, Irish Capuchin Commissary General, with Archbishop Paul Cullen, regarding the construction of St. Mary of the Angels.