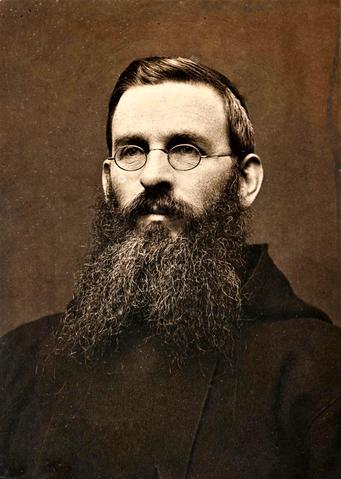 John Hayden was born in Gowran, County Kilkenny, on 7 November 1870. His parents were William Hayden, a railway station master, and Mary Hayden (née Morrissey). On 8 December 1884, he was among the first five pupils to be admitted to the recently opened Seraphic School at Rochestown in County Cork. He took Augustine as his religious name upon entering the Capuchin Order in November 1885. Towards the end of his clerical studies his health deteriorated and he was forced to spend two years in Switzerland. He was ordained a priest in the Augustinian Church on Thomas Street in Dublin in November 1893. On 3 August 1896, Fr. Augustine was appointed rector of Rochestown College, replacing Fr. Francis Hayes OFM Cap. He held this position from 1896 to 1907. He later returned to Dublin and was guardian (local superior) of the Church Street Friary from 1913-6. He cultivated a strong interest in the Gaelic Revival and in particular preserving the Irish language. He was associated with Shán Ó Cuív (1875-1940) in establishing the Irish Language College at Ballingeary, County Cork in 1904, the first college of its kind. He was also a regular correspondent with Fr. Peadar Ua Laoghaire (1839-1920), a noted figure in Conradh na Gaelige, and for many years conducted missions in Gaeltacht areas of Counties Kerry and Donegal. In the immediate aftermath of the 1916 Rising, Fr. Augustine accompanied Fr. Aloysius Travers OFM Cap. in visiting Patrick Pearse and James Connolly. He was instrumental in securing the surrender of Thomas MacDonagh at the Jacob’s Factory and was present at Ėamonn Ceannt’s surrender at the South Dublin Union. He also ministered to Ceannt in the hours before his execution. Like the other Capuchin friars of the Dublin community, Fr. Augustine later committed his memories of Easter Week to writing (CA IR-1-4-1). In 1917, he was the celebrant at the wedding of Terence MacSwiney to Muriel Murphy and he was also the celebrant at the marriage of McSwiney’s daughter in Cork in 1940. He authored a number of devotional texts including 'Ireland’s Loyalty to the Mass' (1933) and 'Ireland’s Loyalty to Mary' (1952). Fr. Augustine died on 6 February 1954 in the Bon Secours Hospital in Cork, and was laid to rest in the cemetery adjoining the Capuchin Friary in Rochestown in County Cork.