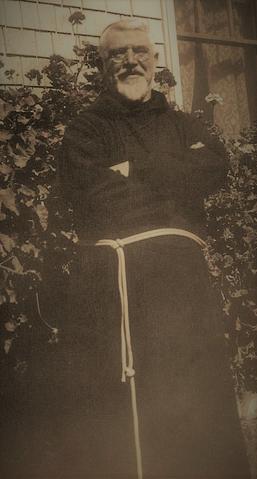 Michael Joseph Dowling, the son of Michael and Catherine Dowling (née Byrne), was born in Kilkenny on 13 March 1874. John Dowling, a younger brother, joined the Capuchins in 1888 and took Laurence as his religious name. Michael followed in his brother’s footsteps and joined the Order in Kilkenny a year later in September 1889. He took Thomas as his religious name and he was solemnly professed as a friar in October 1894. He was ordained a priest in Kilkenny on 21 December 1896. Fr. Thomas was a professor at Rochestown Capuchin College in Cork, and later served as guardian (local superior) of the Capuchin Friary in Dublin. He visited Oregon in the United States in 1910 to select a suitable mission parish for the Irish Capuchins in Baker City. In this period, he held several senior administrative positions in the Order and served as definitor (councillor) from 1907-10 and was Provincial Minister of the Irish Capuchins from 1910-3. He was also guardian of Holy Trinity Friary in Cork in 1920.

He emerged as a prominent public figure in Cork because of his high-profile campaigning on social and political issues. He was active in the Anti-Conscription campaign in the city in 1918 and was elected Honorary President of the Cork and District Trades and Labour Council. During the First World War, there was widespread economic distress in Cork as wages failed to keep pace with rising prices. The result was numerous strikes and general worker unrest. Dowling had studied social reform and he threw himself wholeheartedly into the task of industrial dispute mediation. His interventions were accepted by employers and trades unions alike. He presided over negotiations between tramway workers and their employers in a crucial wage dispute and was instrumental in securing a settlement between the two sides in 1919. He was awarded the freedom of Cork in 1920 in recognition of his invaluable services in preserving the peace of the city and for his role in successfully resolving industrial disputes. He also received an honorary degree (an LL.D. or a Doctor of Laws) from Professor P.J. Merriman (1877-1943), President of University College Cork. The award was given on account of his ‘invaluable services’ in ensuring peaceful and harmonious social relations in the city. The Cork Trades’ Council later donated a stained-glass window to Holy Trinity Church to mark his contribution in securing workers’ rights.

His ministries as a Capuchin friar centred on preaching missions and retreats and he was also an enthusiastic promoter of the temperance cause (he was instrumental in organising the Father Theobald Mathew Pavilion at the Cork International Exhibition in 1902). In 1926 Fr. Thomas offered to travel to the United States to work as a missionary friar. The Irish Capuchins had established a mission custody on the American Pacific Coast in 1910. His first appointment was in Our Lady of the Angels Church and Capuchin Friary in Burlingame near San Francisco. He was appointed Pastor of St. Lawrence of Brindisi Church situated in Watts in South Los Angeles in 1937. In the following years he succeeded in paying off the considerable debt on both the church and the adjoining school. He served as Custos (Superior) of the Western American Capuchin Mission from 1940-6. He died on 7 January 1951 and was buried in Calvary Cemetery in Los Angeles.