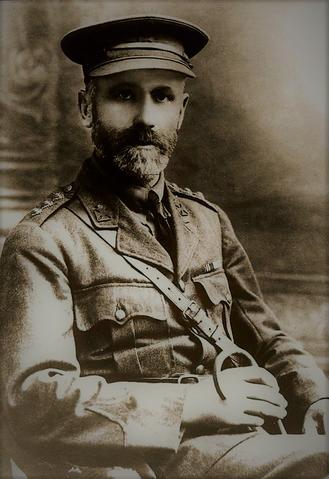 Patrick Butler was born in Sheastown, County Kilkenny, on 6 February 1873. He joined the Capuchins in 1890 (taking John as his religious name) and was ordained a priest in January 1899. For the following three years he worked as a science teacher in the Capuchin College in Rochestown, County Cork. He subsequently joined the missionary staff and was involved in giving missions and retreats throughout Ireland. In 1914, he travelled to Harrisburg in Pennsylvania. He spent nearly two years in the United States assisting Irish Capuchin missionaries in preaching activities. Following the outbreak of the First World War, he returned to Ireland, and in April 1916 was appointed a chaplain in the British Army with the rank of Captain. He served for a short time with the home garrisons in Canterbury and in Blackpool. He was later sent to the Middle East and Palestine as part of the Egyptian Expeditionary Force (EEF), an Allied military formation which fought the Ottoman Turks for control of this strategically important region. He was present at the Battle of Gaza (March 1917), and at the capture of Jerusalem (December 1917), and later acted as chaplain in a casualty clearing station in Damascus. Fr. John returned to Ireland in 1919 and spent the following eleven years in the Capuchin Friary on Church Street in Dublin. In 1930 he moved to Cork and was attached to the community at Holy Trinity Friary. He remained in Cork until his death on 3 October 1950.