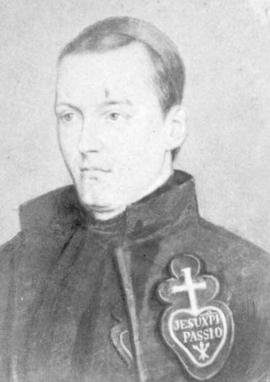 Two page biography to be found at: Page 1 Page 2

Full biographies include:
-After Night the Dawn : the life of Paul Mary Pakenham, Passionist by Stephen M Hanford 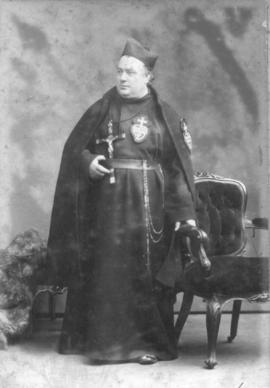 The Province of St. Joseph has sustained a severe loss by the death of the Rev. Fattier Sebastian of the Blessed Sacrament, This zealous son of St Paul of the Cross, known in the world as Sebastian Keener lived 41 years in the Congregation and died on the anniversary of his birth on the 28th of September (1891) having been bom on the same date 1831.

The place of his birth was London and his parents were pious Catholics, his father having been converted from Protestantism in early youth. He entered the Congregation in 1849 and was the last novice accepted by the V. Rev. Fr. Dominic of the Mother of God. Having made his profession on the 14th February I850, tie years of his studies were marked by his love of the Holy Observance, and when in due time he was promoted to the Holy Order of the Priesthood, he was chosen Vice Master of Novices.

In 1858 he was sent by his superiors to St. Paul's Retreat, Mount Argus, Dublin, anc to this Retreat he remained attached until the time of his death, except from 1869 until 1872 during which interval he was Rector of St Joseph's Retreat Highgate, London.

It was thus at Mount Argus that the greater part of his Priestly life was spent, and here it was that he displayed that wonderful zeal for God's glory which so distinguished him. During the 30 years that he was connected with Mount Argus he was truly indefatigable in his labours. Frequently engaged on Missions in Ireland, England and Scotland his preaching drew thousands of poor sinners to the Sacraments, and every mission given by him was blessed by God with marvellous results. Without having much of the gift of eloquence property so called he spoke from the heart in his sermons and seldom failed to touch the hearts of his audience. In the duties of the confessional he laboured with unwearied assiduity, and never I seemed to rest while sinners were to be attended to in the Sacred Tribunal.

This is true of him not only on missions but i t was his daily life in the Retreat of Saint Paul.

He had a rare gift of attracting souls from the vanities of the world and placing them in the secure sanctuary of the Religious State, One of the greatest services he rendered to our Province was the number of pious and talented subjects who through his means entered the Congregation. Of these two were made Provincials, several Rectors and some of our most valued missioners were attracted to our institute under his direction. With the same zeal he led a great number of his female penitents to enter the Religious State, and it would be impossible to form an idea of the numbers who are now in convents in both hemispheres. The Sisters of the Passion gratefully acknowledge that their numerous convents in England and Ireland are filled with holy and zealous Religious who under God owe their vocation to his burning zeal.

Besides this wonderful life of zeal for God's glory and the sanctification of souls in the intervals between his missionary and spiritual labours he was for 30 years the zealous questor for the temporal wants of the community. To his exertions we are principally indebted for the spacious Retreat of St. Paul Mount Argus and its universally admired church. The words of the Psalmist can with truth be applied to him, "I have loved, O Lord, the zeal of Thy house and the place where Thy Glory dwelleth."

In his religious life he was remarkable for childlike simplicity of character. His obedience to his superiors was prompt and cheerful. His charity for his brethren was very great especially when any of the community were sick he would seek to procure for them whatever would alleviate their sufferings or tend to their comfort and he always gave great edification by speaking in praise of his brethren in the presence of seculars, thus-increasing the respect of all for his Mother the Congregation.

He was unremitting in his exertions to promote devotion to our Lord's Sacred Passion and this not only in sermons and in the confessional and through the Confraternity of the Passion attached to our church, but he established the Confraternity on missions wherever he could and invested great numbers with the Black Scapular of the Passion in all parts. Great also was his devotion to the Dolours of the Blessed Virgin and to the Divine Sacrament of the Attar. He wrote and published several volumes on our Lady's Dolours, The Manual of a Happy Death, Our Lord's Passion, The Blessed Sacrament, and Saint Michael which have passed through several editions. In this wa y did his zeal inspire him to labour for souls where his voice could not reach and took means that even after death he should yet speak to the hearts of many of God and the salvation of their souls.

His life of unremitting toil could but tell on his naturally strong constitution. For some time past his brethren could observe a great change in him and on Sunday morning the 30th August while in the confessional as was his custom at that time he felt suddenly unwell. He passed out to prepare to offer the Holy Sacrifice and while thus engaged he had suddenly a stroke of apoplexy. The medical attendant was soon with him. and for some time he seemed daily to improve having recovered the use of his right hand and side which were paralyzed. But on the 21st September he received a second stroke which paralyzed his left side and rendered him completely unconscious. In this state he remained with slight intervals of consciousness until the morning of the 28th September his 60th birthday when he calmly breathed his last fortified by the Sacraments of Holy Church. The day of his death was the eve of the feast of Si Michael to whom he had a special devotion. The colossal statue of St. Michael which now adorns the front of St. Paul's Church is due'to his exertions.

His obsequies were attended by about 80 priests secular and regular. The Most Rev. Dr. Woodlock, Bishop of Ardagh, presided at the Office, and the Requiem Mass was sung by the V. Rev. Fr. Gregory, Provincial of the Anglo-Hibernian Province. The vast numbers of the laity whom the spacious church could not contain attested to the esteem and respect in which tile good Father was held by the people in whose midst he had laboured so long and so faithfully.

We have no doubt that God has prepared as the reward of his laborious life a bright crown of eternal glory, but as he had to pass before the Judgement Seat of Him Who has declared "Ego justifies judicabo* I beg of your Reverence to have the usual suffrages offered for the repose of his soul.
Signed "Dominic of the Imm. Heart of Mary, Rector"/