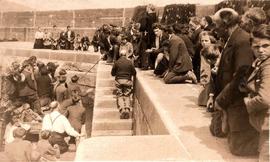 The Mission and Retreat Apostolate

Since the foundation of the Order in the early sixteenth century preaching by the Capuchin Franciscan friars has played an important role in the life of the Catholic Church. It was also one of the foremost apostolates and evangelistic activities undertaken by the Irish Capuchins. The practice of preaching week-long special missions became widespread in Ireland after Catholic Emancipation (1829). The upsurge in devotional practices and the dramatic increase in Mass attendance in the late nineteenth century created a widespread demand for parish missions and retreats. Secular (diocesan) priests were not always plentiful so there was a general dependence upon religious orders for preaching and for parish mission work. The geographical extent of these missions ranged throughout the entire country. The content of the sermons preached during these missions centred on traditional themes such as vices and virtue and punishment and glory, embodying the Franciscan charism of self-denial, the performance of penance, and peace and goodwill to all. The form of the mission followed traditional patterns with sermons preached by the friars focusing on devotion and prayer. This was frequently adapted to local circumstances. The increasing demand for parish missions and retreats from both the laity and from religious congregations placed a severe demand on the Capuchins. It was difficult to maintain regular religious observance, staff churches and run lay sodalities when many friars and preachers were away on mission work. Despite these difficulties, the number of missions conducted by the Irish friars increased in the first decades of the twentieth century. In the years from 1910 to 1913 the Capuchins undertook 405 weeks of missions throughout Ireland. Fr. James O’Mahony OFM Cap. (1897-1962), Provincial Minister, referred to the importance of mission preaching in a circular letter to the friars dated 31 August 1943:

'A mission or retreat is a very serious and sacred thing in the eyes of the secular clergy and the people who … who expect us to be distinctive and other, bringing with us that Franciscan atmosphere … We, therefore, exhort the priest to compose their lives, when on missions and retreats, that they will give a true picture of Franciscan spirituality. Let them avoid everything that might shock the spiritual susceptibilities of the clergy and the people; let them observe such external properties as are demanded by the Gospel; and God will bless and reward them as true heirs to the apostolate of St. Francis of Assisi'.

The Temperance Crusade in the twentieth century

Mission work increased dramatically when the Capuchins accepted an invitation from the Irish Catholic hierarchy to preach a national temperance crusade in 1905. Inspired by the life of the famed temperance campaigner and Capuchin priest, Fr. Theobald Mathew OSFC (1790-1856), the Irish bishops entrusted the campaign to promote teetotalism throughout Ireland to the friars. The Capuchins dedicated themselves wholeheartedly to the task. Twelve priests were selected to undertake the work and they preached dozens of temperance missions every year. The characteristics of the temperance crusade built upon the existing missionary work of the friars. Travelling from parish to parish, the priests would preach on temperance, give the pledge to refrain from alcohol for at least twelve months, and encourage the congregation to go to confession and receive communion. In order to perpetuate the fruits of their work, efforts were also made to establish temperance sodalities which would meet once a month in the local church. The crusade, which began in earnest in January 1906, was solidly supported by the bishops and clergy who facilitated the efforts of the Capuchin preachers. In 1906, 117 parishes in 23 of the 28 dioceses in the country were visited and a total of about 200,000 pledges were given. In 1912, Fr. Thomas Dowling OSFC (1874-1951), Provincial Minister, informed the General Minister of the Order that since 1905 the pledge had been given to 1,141,191 persons. 'The Father Mathew Record', a monthly magazine founded by Fr. Aloysius Travers OSFC (1870-1957) in 1908 to advance the cause of temperance, published glowing accounts of temperance demonstrations, missions and processions throughout the country. Fr. Aloysius was also responsible for founding the League of Young Irish Crusaders in 1909. Membership of this organisation was confined to persons under twenty years of age. It aimed to promote total abstinence and loyalty to the church and encourage the study of the Irish language and culture. In the first year of its existence, the League succeeded in enrolling almost 100,000 members.

The missionary zeal of the friars ensured that their temperance work extended to almost every part of the country. From Falcarragh in north Donegal to Bantry in west Cork, and from Achill Island off the western seaboard to the urban centres of Dublin and Belfast, the Capuchins worked tirelessly on the temperance mission. Despite the encouraging signs, it quickly became evident that the friars’ labours were not all that effective. At the end of a short mission, they would give the pledge to all comers and then move on to another parish the following week. Without any organizational support to follow-up, many of those who took the pledge soon fell away. It was clear that enthusiasm for temperance cooled when there was no permanent structure in place to continue the work. On returning to parishes that had previously been visited, the friars found only disappointing evidence of their missionary labours with no central register recording renewals of the pledge. It also appeared that many had rapidly discarded their temperance badges. Fr. Aloysius admitted in 1914 ‘that despite wonderful success attending our missionary zeal in every part of Ireland … the result in so far as it remains a permanent memorial of our work is not what it should be’. For a time, temperance societies and pledge-giving did flourish in locations where the Capuchins maintained a permanent foundation or residence. Many friars continued to work enthusiastically for the cause and priests on missions rarely neglected a sermon on the dangers of intemperance but there was to be no revival of a nationwide Capuchin-led total abstinence movement. By the early 1960s dramatic cultural and economic changes in Irish society resulted in a marked decline in popular enthusiasm for the temperance cause. Membership of total abstinence societies (such as the Sacred Thirst Sodalities, the League of Young Irish Crusaders and the Pioneers) collapsed. The steady decline in vocations also ensured that the Capuchins (in common with other religious orders) no longer had the personnel or resources to conduct the kind of extensive parish missions and retreats which were once a defining feature of their ministry in Ireland.

The collection includes records relating to parish missions and retreats preached by the Irish Capuchin Franciscan friars in the late nineteenth and early twentieth centuries. The collection also includes material relating to temperance missions given by the friars in response to a call from the Irish Catholic hierarchy to undertake a nationwide total abstinence campaign in 1905. Record series include lists of missions or retreats given by the Capuchins, local mission accounts and commentaries, temperance and pledge-taking records, correspondence, publicity material, printed ephemera and newspaper reports on missions preached by the friars. 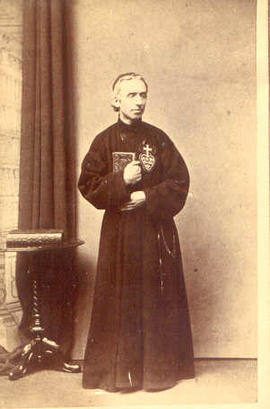 Photos of the Passionist Congregation